The search giant also showed off a goofy “talking shoe” at SXSW 2013. So what does this talking shoe do? Unfortunately, it doesn’t issue warnings telling its wearer to avoid dog poop and other roadside hazards. Instead, Google’s latest toy “aims to translate movement data into witty messages to users and their friends.

In a google video promo the sharp-tongued shoe mutters, this is boring” when its wearer is loafing on a park bench but perks up when he breaks into a trot, enthusing, “i love the feeling of wind in my laces.”the gamesmanship starts in earnest when a google talking shoe owner steps onto the basketball court and starts raining jumpers– “call 911, because you’re on fire.” the soliloquizing sneaker declares. 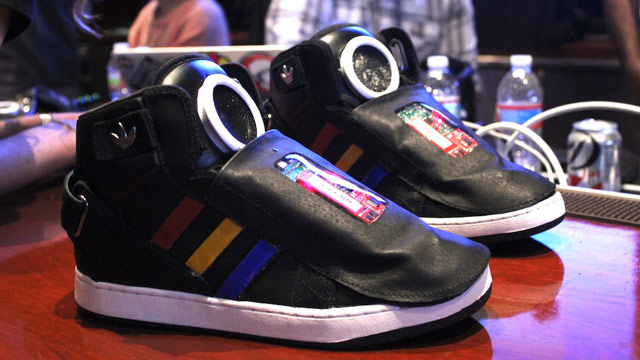 Apparently, these pronouncements also appear on a user’s google+ page, or at least they’re presented in that format in google’s promo video. the bad news– don’t expect to order up a pair of these pontificating clogs any time soon. they’re just a concept developed for interactive arts collective ‘yes yes no’ via google’s ‘atts copy code’ project.

We waiting for this product.