Korean handset maker Samsung diversified its Galaxy series by introducing a new line up of tablets and phones. The Samsung Galaxy Note 3 Neo’s India launch happened at the Samsung Forum 2014 in Bali in Indonesia. The Galaxy Note 3 Neo is essentially a watered down edition of the Galaxy Note 3 and comes with some impressive specs and amazing looks. 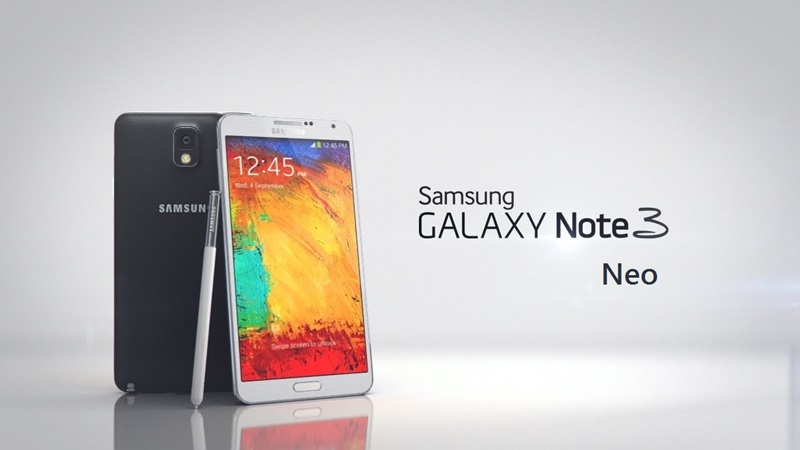 The Note 3 Neo, as mentioned is a toned smaller variant of the much popular Note 3. It is expected that the Note 3 Neo will hit various retail stores towards the month’s end or in the beginning of the month of March and would be retailing at a label of INR 40,900. Though the price of Galaxy Note 3 Neo comes quite close to that of the Note 3, and the street price of the Note 3 Neo is not likely to be more than INR 35,000. In the aesthetics and design department, the Galaxy Note 3 Neo is quite similar to the exciting former Note 3. The fact remains that is faintly lighter as compared to its elder brother and also somewhat thicker but it would be difficult to spot the dissimilarity. The sides of the Galaxy Note 3 Neo get chrome strips, but do not have the ridges which the device featured and the label surrounding the camera is slightly different as well.

The Galaxy Note 3 Neo comes as an updated version of the Note 2, only wearing the look of the Note 3. Features of the Neo are much identical to the Note 2 which implies that the Neo gets a 5.5-inch High Definition display which comes again very impressively. The stupendous Note 3 Neo also packs in inbuilt storage of 16 GB which can be further expanded to 64 GB with a micro SD card since a micro SD card slot is provide.

For all those who are wondering whether the device is just a recycled version of the Note 3, they are highly mistaken. One of the most striking points of the Neo is its hexa-core processor. It is very first phone that packs with something of such magnitude and characteristics. It is designed as per the similar Big. Small construction that we got to see in Octa-Core Soc processor of Samsung, the Neo’s Exynos 5260 has a quad-core Cortex processor A7 chipset that clocks at 1.3 GHz an also dual-core clocked at 1.7 GHz. There is also a much powerful Mali- T 624 that powers the Neo. The Note 3 Neo packs in ample RAM cache of 2 GB while onboard storage of 16 GB is quite decent. The 3G only version of the Neo gets a 1.6 GHz quad core processor. The rear primary snapper of the Neo comes equipped with a 8 megapixel BSI sensor and can also record Full HD videos. The front-facing 2 megapixel sensor aids in effortless video calling.  The Neo runs on 4.3 Jelly Bean Android operating system featuring TouchWiz UI present out of the box.

The stunning Note 3 Neo’s 5.5-inch screen looks quite captivating. It features  720p resolution and the screen is a AMOLED display.  The Note 3 Neo from Galaxy also packs in a commanding 3100 mAh battery back up. In the connectivity department, it features NFC, GLONASS, GPS, WiFi, 3G, Infrared and Bluetooth.

There is also a multi-window feature, as per the document. The Neo also gets air command feature as well as magazine UX. HSPA +42 Mbps is its network connectivity. Indeed, the Samsung Galaxy 3 Neo looks quite promising enough but Samsung could have brought it at a lower price. The price disparity the Neo and the former release Note 3 is not very significant so if someone has a financial plan of nearly Rs. 40,000, then the amazingly new Neo is a great buy this season.

The Note 3 Neo also proves to be an amazing replacement for Note 2 and also makes for an exciting addition to the Korean handset maker’s impressive arsenal that fall in the INR 30,000 – Rs.35000 price range. Needless to say, this price segment has become quite competitive even as the Note 3 Neo strong competes with the likes of LG G2, Xperia Z1 and the Galaxy S4 as well.

Some critics opine that the Note 3 Neo is a cheaper edition of the Note 3, it still comes with some of the most premium and high-end features that Note 3 has like Multi Window, Air Command and the Neo is also compatible with the Galaxy Gear smartwatch as well as pressure sensitive S Pen stylus.

Samsung have been launching devices with a powerful version and a despec’ed version of some of its model to make sure people are buying based on their money power. As people have plenty of options these days including high-powered smartphone in one hand and a Mini version to it. These gimic will not surprise buyers all the time as they are already aware of what they are paying for. There are devices like the Nexus 5 and LG G2 are doing well in the market, if priced it well, then it going to kick the beat.

Author Bio: The article has been written by Kundan Kumar, who is passionate about technology. He’s working at 91mobiles.com and writes about the latest in the tech domain, right from devices to innovations. You can follow me on Twitter.